Most modern (business) voice phones have the capability to do
comfortable LDAP directory look-up like:

Unfortunately, most of the 'smaller' companies (i guess companies beyond
100 employee) don't have an 'enterprise' LDAP directory, much less than
private persons.

Most of such companies do have something like a cloud address book,
often based on WebDAV / CardDAV (i.e. Nextcloud, Ownlcoud, Baïkal,
Daylite, Synology Contacts, ...).

This is, where this Gateway might make your live easier.

If this program (daemon/service) get started on some kind of hardware (Windows, macOS or Linux), it will do the following:

You need some kind of 24/7 machine where this gateway live. Windows PC,
Linux, macOS, Raspberry or the like.

By default it will look for a configuration file in the following places (in the
given order):

It will write to a small local database directory (defaults to 'os.TempDir()/l2cpbg.db').

At the moment there's no "Admin GUI". But for miminimal infos like "uptime", "license", "number of search requests", "number of sent result records", as well as immediate CardDAV-Server sync trigger, you might send the l2cpbg process a SIGHUP signal and check the logs afterwards.

Since L2CPBG became more and more usable, it got necessary to ensure that the free version get only used by private persons and not by companies or professionals. That's why I limited the "Free" version to 2 phones (LDAP clients) as well as a max. of 100 contacts.

Luckily I also got convinced that it would be more approriate (in special for smaller companies) to have a more fair price-matrix instead of a "one for all fee".

If you get hit by the new limitations of the free version, think about selling a license (also to support further development). Here's the price matrix:

Before deciding to buy a license, please ensure that L2CPBG work as expected with all your phones and your CardDAV server. If you can't test it because of the free limitations, or any other reason, don't hesitate to ask for a 60 day evaluation license. Simply drop me a mail to projects@shbe.net with your real name.

dpkg -i l2cpbg_<version>_<architecture>.deb to install the package.

If l2cpbg started up, adapt your phone(s) to point their "LDAP Directory" lookup requests to l2cpbg with the settings you defined in /etc/l2cpbg.conf.

Adapt your phone(s) to point their "LDAP Directory" lookup requests to l2cpbg with the settings you defined in /etc/l2cpbg.conf.

Adapt your phone(s) to point their "LDAP Directory" lookup requests to l2cpbg with the settings you defined in /etc/l2cpbg.conf.

The package (pkg) installer does the following:

After installation, initial startup would fail due to wrong/missing settings in config section [dav]!

Adapt your phone(s) to point their "LDAP Directory" lookup requests to l2cpbg with the settings you defined in /usr/local/etc/l2cpbg.conf.

Uninstalling the whole package is done by sudo /opt/l2cpbg/uninstall.sh

Since version 0.9.0 the config file syntax has changed from 'ini' to 'toml'. Not a big deal, but you need to adapt some entries. Mainly strings have to be entered within quotes!

host : Which IP to listen for LDAP requests. Defaults to "0.0.0.0" = 'Listen on all interfaces'. You've to point your LDAP phone settings to this machines IP/hostname.

port : Which port to listen for LDAP requests. Defaults to port 1389. The standard LDAP port is 389, so you need to change your phone to the port you configure here.

base : This LDAP's 'base DN'. Choose whatever you want, but use the same settings within your phone's LDAP settings. Defaults to 'dc=example, dc=com'.

dn : Distinguish name. Name, how the phone has to log into/authorize
to the gateway.

pass : Related 'dn' password, a phone has to use when logging in/authorize to the gateway.

user : WebDav username with read access to the relevant addressbook which shall be requested for phone book lookups. Might also be a 'shared' address book.

pass : Related user password. If you don't like to store your CardDAV-Server password in clear-text here, you've also the possibility to use the AES-256 encrypted variant of the password here. Please check l2cpbg's command line option --encryptPassword via l2cpbg --help. If you already stored the encrypted password variant here, you can also check/validate it with command line option --testDavPassword.

addressbooks : Optional regular expression string of matchable addressbook(s)
used for phone book lookups. If unsure, enter something. l2cpbg will log
all found address books of the logged in CardDav user during startup and
log them as 'Non-matching' or 'Matching' address book(s).

syncinterval : Interval of CardDav sync checks. Given as string with suffix 'm' for minutes, or 'h' as hours. Has to be greater than "2m".

chunksize : If an address book get loaded the first time, it get loaded in "chunks of contacts" in this given size. You may increase this value for quicker initial load, but if your CardDAV server answer with an "507 Insufficient Storage" error or similar, you need to lower this value. Default to 200. This option was added in L2CPBG version 0.8.1.

insecurecert controls whether a client verifies the server's certificate
chain and host name. If insecurecert is true, crypto/tls accepts any
certificate presented by the server and any host name in that certificate.
In this mode, TLS is susceptible to machine-in-the-middle attacks unless
custom verification is used. This should be used only for testing or in
trusted environments. Defaults to false. This option was added in L2CPBG version 0.9.1.

tel : CardDAV attribute which contain phone numbers. Normally (and
by default) 'TEL'. Don't change this, except your really know what you're doing.

areaPrefix : Dial prefix for national calls. Mostly "0". Defaults to "0".
ATTENTION: Has to be entered as string like "0".

prettifyNums : By default phone numbers loaded from CardDAV get prettified in two ways:
At first, if a CardDAV number is stored in international format, but you live in the same country, the international part get removed.
At second, the number get formatted in (spaced or braced) number groups as it's common in your country.
You can disable this prettifying by setting the value to false.

prettifyRemoveSpaces : Boolean (true|false) which will remove all spaces from a prettified phone number. Defaults to false.

extdialprefix : Optional external dial prefix for getting an external line. Get prefixed before the phone number if outgoing number length > maxintlength

trace : This is the most verbose log level. It logs simply everything.
Never use it in production environment as it might produce an awful amount of log entries!
When started as Windows-Service, 'trace' messages doesn't get send to windows event console.

debug : Logs a lot internal stuff, probably interesting when searching
a solution for an issue. Should not be used in production environment as
it produce also a lot log entries!
When started as Windows-Service, 'debug' messages doesn't get send to windows event console.

info : This is the most usual log level. Logs only stuff which is relevant.

warn : Logs stuff which doesn't behave as expected. Not critical (generic functionality should be okay) but should be noticed/checked.

error : Something essential/critical happened. Functionality is limited or aborted at all.

directory : An own directory where to store the internal database. Defaults to
'os.TempDir()/l2cpbg.db' which is not very useful on Linux based systems as it normally get cleaned after each reboot.

ATTENTION: If you use one of the .deb packages, the binary get started as user=l2cpbg.
Thus, the given directory, manually need to made owned by l2cpbg via
chown -R l2cpbg:l2cpbg /your/db/directory! Otherwise the DB process will fail on missing read/write permissions!

Every LDAP attribute which is used within a phone(s) filter or response, need to have a corresponding CardDav mapping which get done as follows:

First you need to define a separate block for the LDAP attribute in the following syntax: [ldap.map.<ldap attribute name (case sensitive)>]
Within such a LDAP mapping block you have to define:

and optional define the following settings:

index : Zero based index in the case of a multi-value CardDav field.

Here's a configuration sample of a Gigaset N510 IP PRO: 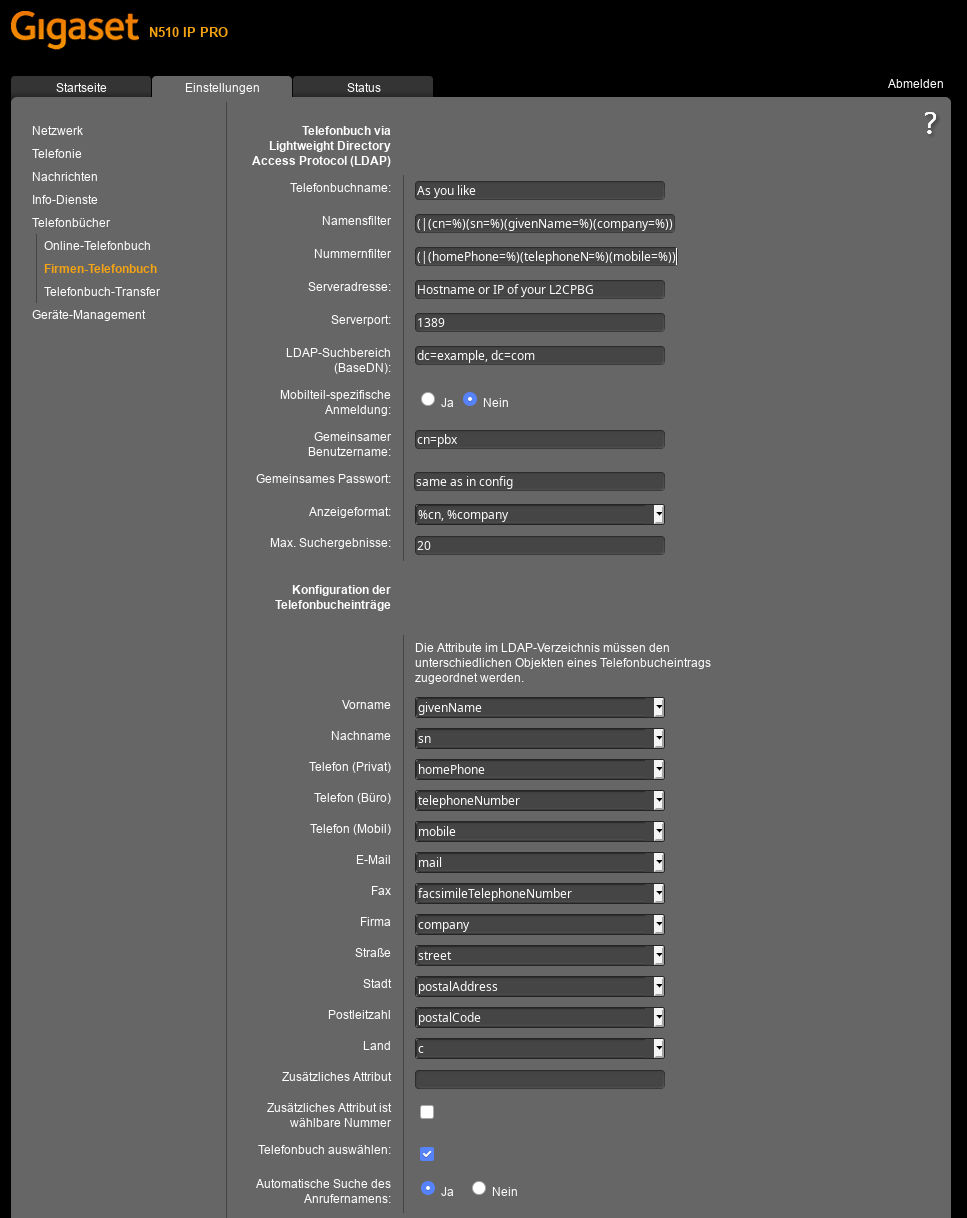 'BaseDN', 'Common User Name' and 'Common Password' get filled with the same values as defined in your L2CPG config file.

Another configuration sample of a Yealink SIP-T52S: 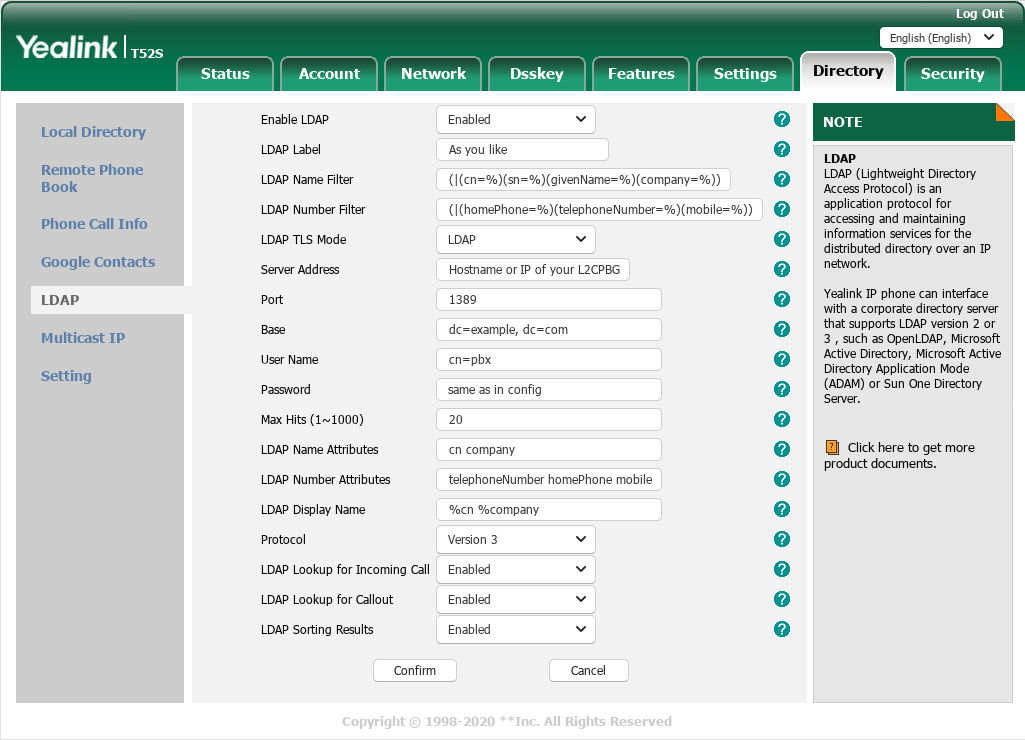 Take attention that 'Server Address' point to the machine where this gateway lives (as well as 'Port').

'Base', 'User Name' and 'Password' get filled with the same values as defined in your L2CPG config file.

The LDAP configuration of Snom phones look similar to the ones of
Gigaset or Yealink.
But a user reported that entering (|(cn=*%*)(sn=*%*)(givenName=*%*)(company=*%*)) within 'LDAP name filter' did the trick for working name searches.

There might be special configuration requirements like different CardDAV Server/Phonebook combinations/permissions, or multi-locations requirements which can't yet configured in L2CPBG.

For such special cases, you might start multiple L2CPBG instances. Each with his own configuration or even with the more comfortable merge/overlay configuration loading.

Imagine: You already have a standard instance running, like described within the Installation section. But now you've a special requirement like a office branch (which has access through your office VPN to your L2CPBG server) for which you need other [location] settings.

Do the following to configure and install a new instance:

When dealing with the configuration of multi-instances, you will heavily benefit from L2CPBG's possibility to do merge/overlay config loading, which is not more than loading each subsequent config on top of the previous one.
By this you'll have i.e. your main configuration in l2cpbg.conf whereas your l2cpbg-foo.conf contains only the two or three config changes you're interested in. Then, by adding --config=<your config directory>/l2cpbg.conf,<your config directory>/l2cpbg-foo.conf as l2cpbg command option, it's done.

For getting help or discussing l2cpbg, please browse the L2CPBG
Forum or check/open
the Tickets area.